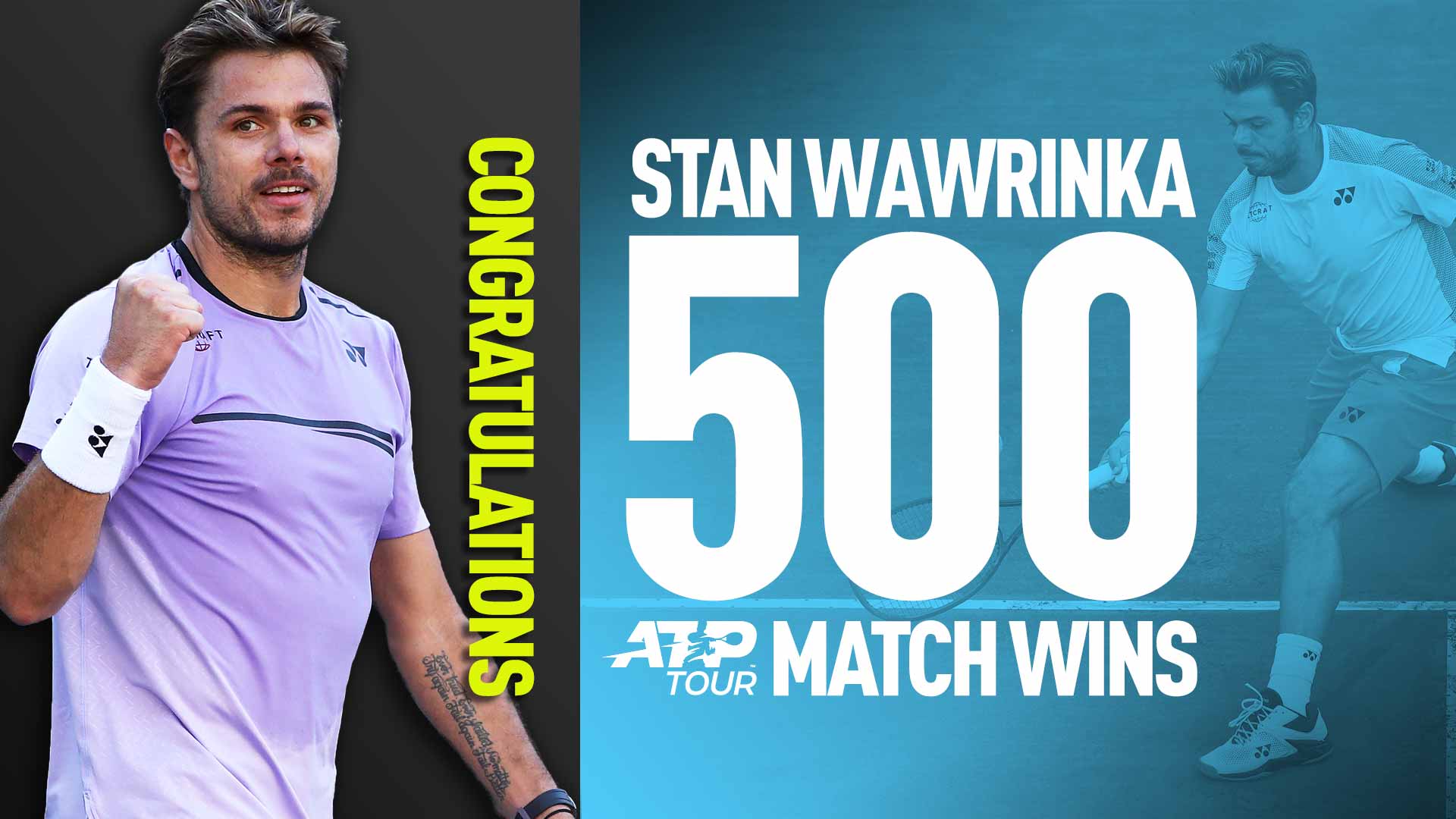 James Buddell, chief writer of the ATP Tour, spoke to Wawrinka on the 500th match win of his career. Story courtesy of ATPTour.com.

It has been quite the journey for Stan Wawrinka to 500 match wins (500-290), earned today with victory over Grigor Dimitrov for a place in the Roland Garros fourth round. Wawrinka will rightly savour his fight from knee surgeries two summers ago and feel positive about the future in his ‘second’ career.

Speaking exclusively to ATPTour.com, Wawrinka said, “The level on our tour is extremely high and you suffer a lot to get to 500 match wins, trust me! So it means a lot to hit the milestone, but I’m not done yet. Let’s keep working hard and start the road to 600!

“I do feel like I’m having a second career, somehow, since I wasn’t sure if I was going to be able to come back. There were many doubts and long weeks on crutches. But I’m happy that I got through that and that I got a chance to compete again and do what I love. I missed the competition, the tour and of course the fans. It feels great to be back.”

Wawrinka first spent 22 weeks in the Top 10 of the ATP Rankings in 2008, but his game, centred on his immaculate timing and one-two punches off his serve and forehand were not yet perfected in comparison to his single-handed backhand. It took a combination of factors for the Swiss to return to the Top 10 — the goal of any tennis player, but requiring consistency week-in, week-out — five years later.

“Winning the doubles gold medal at the 2008 Olympic Games [d. Aspelin/T. Johansson] was important, as I was able to step up when needed, and Roger [Federer] and I worked very well as a team there [in Beijing],” said Wawrinka. “Then, after splitting with Peter Lundgren, I was on my own for a while, which is something that worked very well for me. I learnt a lot about myself during that period, and also got some help from Severin Lüthi, who knows me very well.”

But the defining match that mentally triggered Wawrinka’s career resurgence came on 20 January 2013 in an absorbing Australian Open dog-fight against Novak Djokovic, who won 1-6, 7-5, 6-4, 6-7(5), 12-10 in four hours for a place in the quarter-finals.

“It was one of the key matches of my career,” said Wawrinka. “I saw that I could compete with the very best and that was a key moment for me. Then, a few months later, I started working with Magnus [Norman], which was one of the best decisions I’ve ever made. Those are all pieces of a puzzle that came together in the end when I made it back into the Top 10 and started an amazing phase of my career.”

Yet it wasn’t until almost four months later, on 13 May, that Wawrinka solidified his position again among the Top 10 elite and entered the best period of his career, which included three major championship crowns — the 2014 Australian Open (d. Nadal), 2015 Roland Garros and the 2016 US Open (d. Djokovic both times) — when he overpowered his rivals. His lone ATP Masters 1000 crown, a pulsating 4-6, 7-6(5), 6-2 victory over Federer, at the 2014 Rolex Monte-Carlo Masters, also proved to be a highly emotional moment.

“Winning a Grand Slam title had always been a dream of mine,” said Wawrinka. “But until you win it, it always seems like a dream and something that is quite far away. Once I reached the final in Australia, I obviously knew that I was only one step away from it, but facing Rafa didn’t make it easier. I had been playing very well during those two weeks in Melbourne and that’s when I realised that there was actually a chance that my dream could come through.

“Then winning Monte-Carlo meant a lot to me too. It remains my only Masters 1000 title and everyone knows how tough it is to win those tournaments. Qualifying four times for the [Nitto] ATP Finals is also another achievement that I’m very proud of — being one of the Top 8 players at the end of the season shows that you’ve done a lot of great things during the year. I made it to the semi-finals [in London] three times.”

Today, as a senior statesman of the ATP Tour, for which he served as a Player Council representative from 2014 to 2016, Wawrinka has often used his status for the greater benefit of the sport. And as his on-court performances improve, rewarding his endeavour outside of the tramlines, the 34-year-old is close to returning to the Top 20 for the first time since 5 March 2018 (at No. 11). In the 22 months since his two left knee surgeries, Wawrinka has vaulted back from No. 263 almost 12 months ago (11 June 2018) and once again his rivals are looking over their shoulders.

“I’m very happy with how I played [at the ABN AMRO World Tennis Tournament] in Rotterdam,” said Wawrinka. “It was a bit of a ‘renaissance’ week for me, and reaching the final, and playing against Gael [Monfils], who is a good friend of mine, was quite emotional. As of now my goal is to play well, be consistent and stay healthy. I’ve always said that the ranking comes with the results, but I never focused on the numbers. If I play well, my ATP Ranking will go up automatically. My passion is my job, that’s a great privilege.”