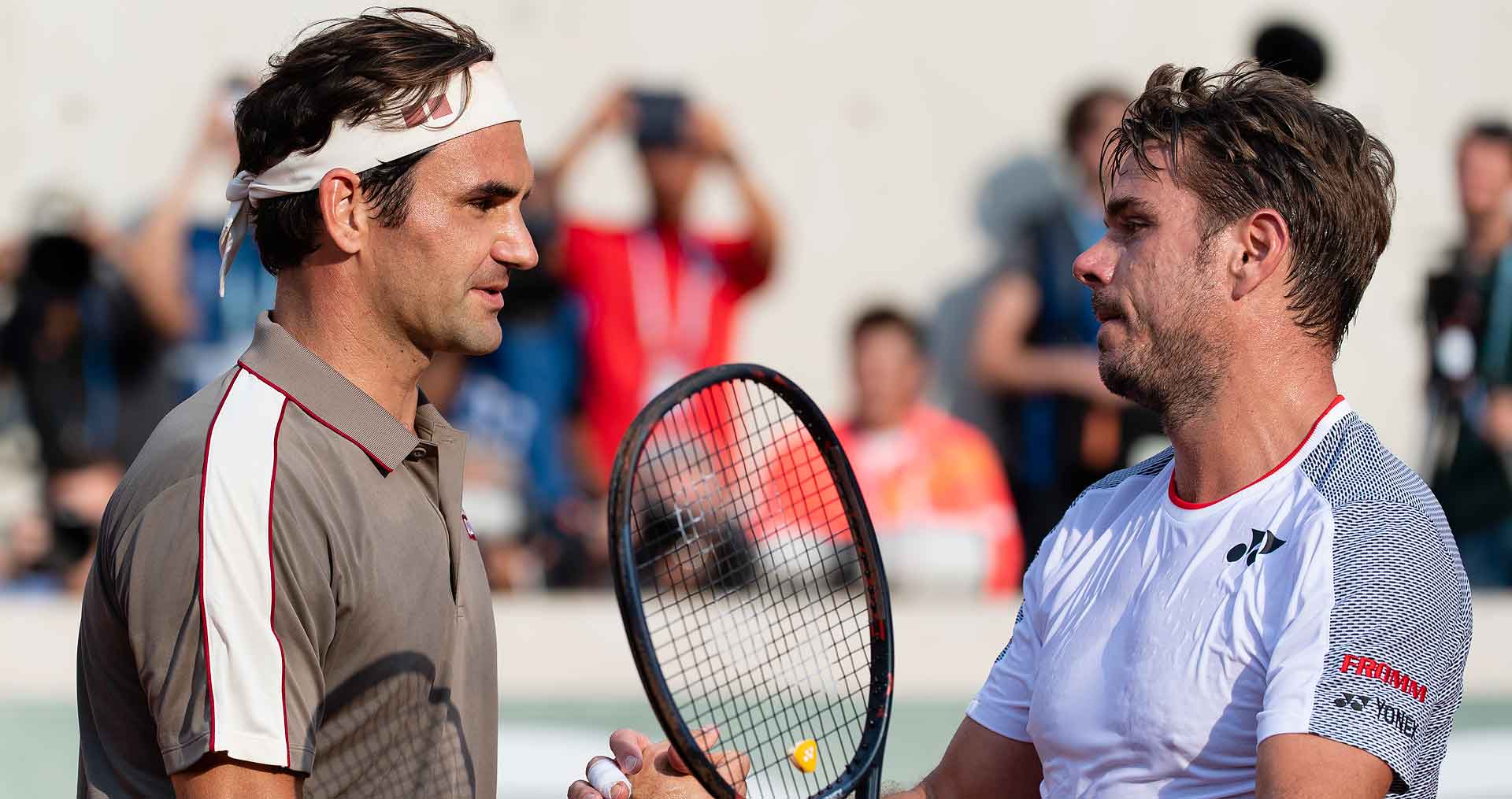 Stan Wawrinka spoke to the media after his 7-6, 4-6, 7-6, 6-4 loss to fellow Swiss Roger Federer in the Roland Garros quarter-finals.

Q. I’m sure this is pretty disappointing, but perhaps you can sort of give an overview about how you view the whole tournament, first of all. And second of all, what was the difference-maker for you today in the fact that you fell short to Roger?
STAN WAWRINKA: I think in general the tournament was great for me. I played really good since the beginning of the tournament, won some big matches, especially against Garin, playing super well against Dimitrov. Tough match in two days followed by Tsitsipas, who is really confidence, playing well this year. Big battle, five hours.

I was super happy also to be ready physically after all those time on the court. Today to give another big battle against Roger was a tough, tough one for sure. But I think in general it was a good battle, a great battle. We both had some little opportunity. I never really had the chance to retake the lead. Even if I had the break in the third set, he came back quickly.

Yeah, only a few points could have changed a little bit the match, but I think I was playing well in those moments. He was a bit more aggressive. This court was quite fast and slippery. It was important to be aggressive, to be inside the court, and he did that better than me.

Q. Has this tournament confirmed that you can have as high expectations of yourself as you ever did?
STAN WAWRINKA: Yeah, maybe confirmed to you guys that I can still beat some top guys.

But as I said before, I know where is my level. I know what I have done to come back in that level physically. For me, what’s the most positive things is what happen physically also, to have played three days in a row with five hours, my longest match in my career, so basically, and still be able to play great tennis today, more than three hours.

This is really good for the future. This show me that I have done the right things. Again, today it was tough match. I lost it against the best player ever to play this sport.

I’m more positive than sad or disappointed with the result, because I know everything I have done to come back to that level. I know also how I left here last year when down in the ranking, like, 260 or something. I’m going to be back in the top 20. For me, yeah, I’m happy with that.

I think it showed that I have done the right things, and I’m happy to keep working and keep playing some big match.

Q. Since you had one year to rest, I mean, because of the knee…
STAN WAWRINKA: Trust me, you don’t rest when you are injured. You don’t go on holiday by the beach and enjoy some Caipina. You don’t do that. (Laughter.)

Q. So I’m asking, do you expect to be playing when you will be 38 like Federer?
STAN WAWRINKA: I don’t expect anything. I don’t expect. I’m happy where I am right now with my age, with my tennis, with everything.

As long as I enjoy to do what I’m doing, as long as I can play well, as long as can push and see that I can have some shot to beat the top players, I’m probably gonna keep playing.

But how long it’s gonna be, I have no idea.

Q. I was wondering, will you be watching Roger’s game against Rafael Nadal in the semifinals?
STAN WAWRINKA: Probably. Probably. Like, I’m a big fan of this sport. So when you get the chance to have in the semifinal of French Open Roger against Rafa, you’re gonna put the TV on and watch. I always did in the past.

I’m probably gonna do it if my schedule is for that. But, yeah, for sure, I’m going to try to catch some.

Q. What do you think will happen?
STAN WAWRINKA: I cannot see the future, my friend. (Laughter.)

Q. You have played Roger many times…
STAN WAWRINKA: Too many times. (Laughter.)

Q. But specifically on this time, on this matchup on the clay, did he do anything which makes you surprised or a little bit uncomfortable?
STAN WAWRINKA: No. Today I was playing great. He was playing the way I expect him to play against me and on clay court. I watch him play beginning of the tournament a little bit. I know the way he’s playing. He knows how I’m playing.

There is no surprise anymore in what we are doing. It’s just about who’s gonna play the best in those important points, and he did that better than me today.

He was a bit more aggressive in the right moment. He went for it a little bit more than me, and he took the lead.

THE MODERATOR: Questions in French.

Q. Over your two matches, you’re almost a record man of saved breakpoints. 22 with Tsitsipas. 18 with Federer. Does it mean that you had your back to the wall?
STAN WAWRINKA: No, not necessarily. They also had this type of points, but the important thing was that mentally I was present on each point. I didn’t try to look at the score. I tried to look at what I could do.

This is when I play my best tennis usually. I can work again and again. And on the other side, they know it. They know if you don’t take advantage over me, I’m going to try to become more aggressive, to get them to run more.

And this is how I won my best titles. This is what I tried to do here over the past 10 days and for all my matches. Even today. Today I did what I could with what I had, and I tried to make it as difficult as possible for my opponent, and this is the most important thing for me in tennis.

Q. With all these fights and struggles during this tournament, how do you feel physically?
STAN WAWRINKA: Well, I feel good. I don’t know what I had last night, but I feel good. I would say it was more difficult when we interrupted the match for the rain.

But I’ll see tomorrow. Honestly, I was really surprised by the way I recovered after my match against Tsitsipas. I thought I would have more muscle aches and I would be more tired. And I was surprised at the way I was able to get onto the court today to play for more than three hours and 20 minutes.

This is something that is positive for the future.

Q. Do you ever think that you’re stronger physically and maybe mentally than before the surgery?
STAN WAWRINKA: Well, mentally, not yet, even though during this tournament I managed to take over mentally to make the right decisions and to progress along the tournament, which is something that was lacking over the past few weeks over clay.

So it shows that I’m stronger than before I was hurt. But I’m not the only one who’s progressing. The others are progressing, as well. Look at Roger.

I have to continue working to win a maximum number of matches.

Q. Can you tell us a little bit how you’re going to recover after this tournament? What do you plan to do over the next few weeks?
STAN WAWRINKA: I’m going to rest a little bit, and then I have to start on grass right away. I plan on playing Stuttgart, Queen’s, Wimbledon.

And as after each Grand Slam, I’m going to take stock tomorrow with my team to see what are the best plans to get ready for grass.

But usually you get from clay to grass very quickly. You do not have many options.

Q. After three matches like this, obviously it shows that your knee is completely recovered. Did you know it before? Or were you able to realize that now?
STAN WAWRINKA: No, I had known it for a few months. I knew that my knee was okay. I had done everything necessary to recover 100% with the right muscles to protect my knee.

But this is the first tournament since I was hurt where I can play long matches, one after the other, without any problems, without any other physical issues.

You know, because I spent a lot of time on the court. This shows that the work I did both physically and tennistically was the right decision, the right thing to do, and I’m very happy with that.